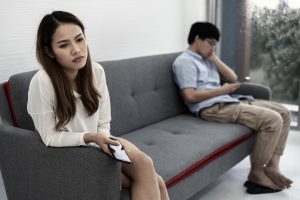 This painful question has been asked many times in my couples’ therapy sessions. It’s put out there as people connect with the bewilderment of the situation, underpinned by sadness at the disconnection that’s become part of their daily lives. As a therapist I believe it’s a great question to ask – in my experience curious clients get more out of therapy. However, unlike in individual therapy, there will be two narratives in the room. Two stories. And one may be more simplistic.

But however difficult it is to have someone hold a mirror up to our behaviour, that’s how we get our answers.

This is particularly true when a betrayal has brought the couple into therapy. One, attention-focusing, morally-trangressive ‘bad’, that gifts the injured party a trump card that can be thrown down every time it gets heated. You don’t get to say anymore! An affair is the obvious example, but abuses of trust appear in many guises.

This was illustrated beautifully in the TV comedy, ‘State of the Union’, based on one couples experience of marital breakdown. Episode two sees their heated debate on what route got them to this point of sadness and anger, with the betrayed husband offering an “as the crow flies” approach to their journey, meaning ‘you cheated, obviously’. However, the unfaithful wife gives a more complex explanation, highlighting the daily hurts and injustices each inflicted upon the other, knowingly or otherwise. Her opinion is rejected by the affronted husband (it would be a short series otherwise!), and his trump card of betrayal is played again…and again…and again.

But however difficult it is to have someone hold a mirror up to our behaviour, that’s how we reach answers.

No-one enjoys hearing how we let others down, made them feel unimportant or acted in our own interests once too often – we want to see ourselves as the good guy. However the reality is that we all go off course from time to time, and unless we recognise this and know how to course-correct, we can lose track of one another. Squabbles or all-out battles can make it difficult to let go of the hurt.

More effective is to take a neutral approach and see each of us as a wounded party. Both partners will have sustained psychological injuries from being within the relationship, and whilst a betrayal requires a meaningful apology for the deep hurt caused and trust can only be rebuilt slowly, the behaviour needs to be seen within the context of the whole relationship. A motivated couple can begin to explore their problems from a curious perspective that integrates both their stories, and learn ways to recognise and resolve conflicts as a result of the tools provided. Partners can begin to rebuild trust and improve communication that may have eroded the quality of their interactions.

It means it’s time to put the trump card back in the pack.

Get in touch to find out more about CBT for couples.